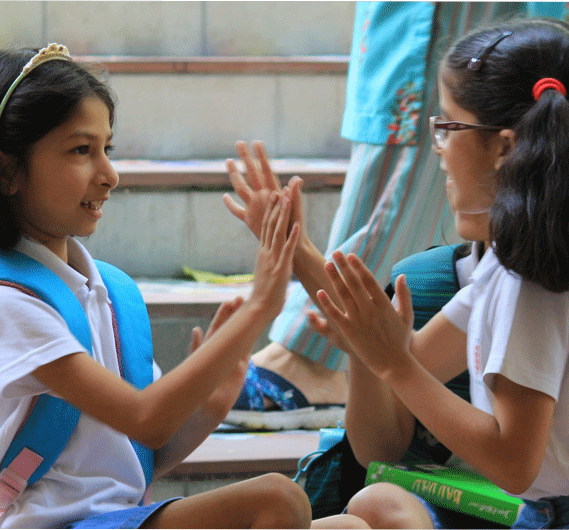 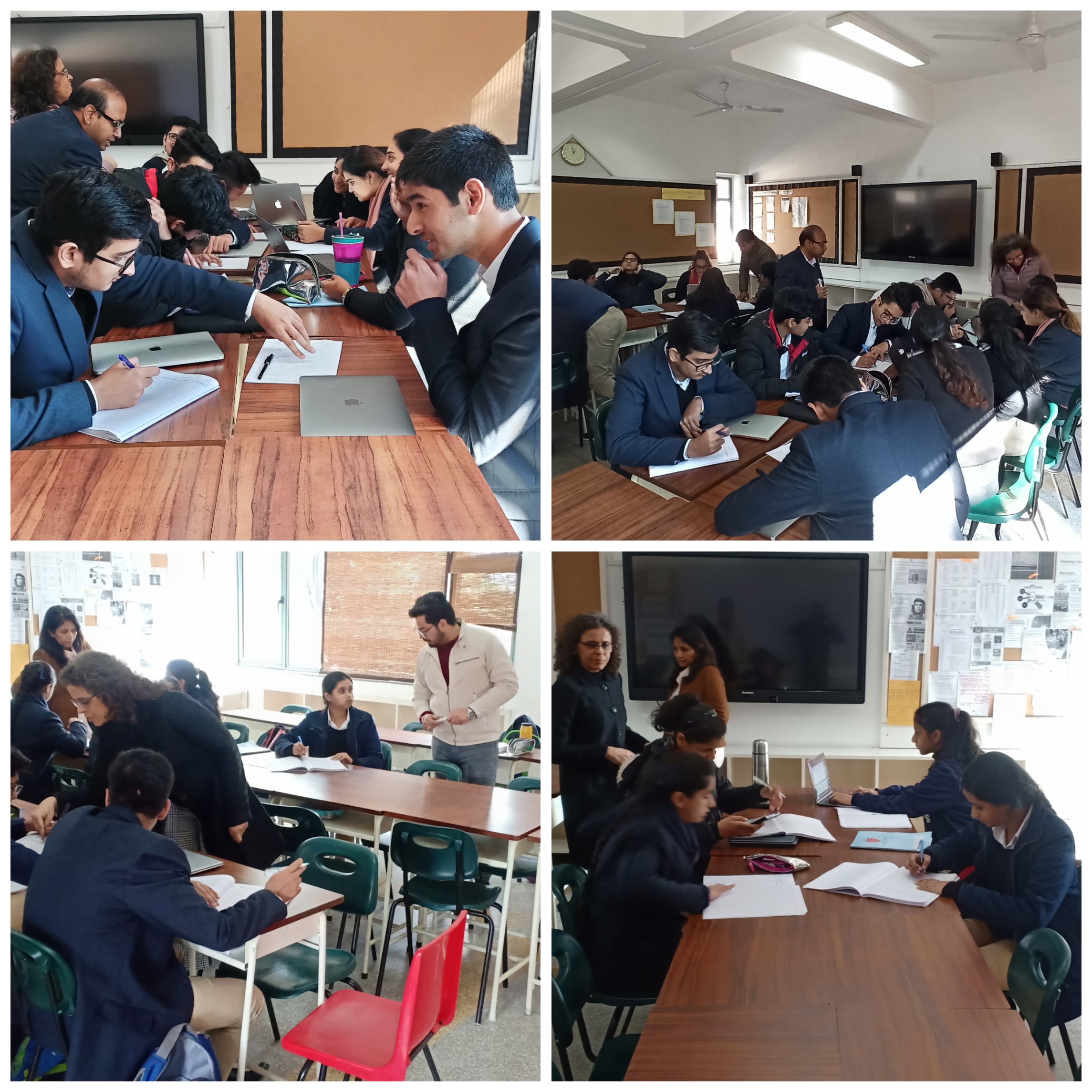 The expert consultant from Course leap Education Mumbai conducted the IBDP Mathematics Session on
January 22, Wednesday. The students along with their mentor briefly overviewed the sample questions
and topics covered in the revision classes. The session was the extension to the Mathematics
Exploration Session conducted on November 18, Monday. The previous session was focused on the
progress in the Internal/External assessments and Extended Essays. Overall the students are benefitted
immensely from these sessions. 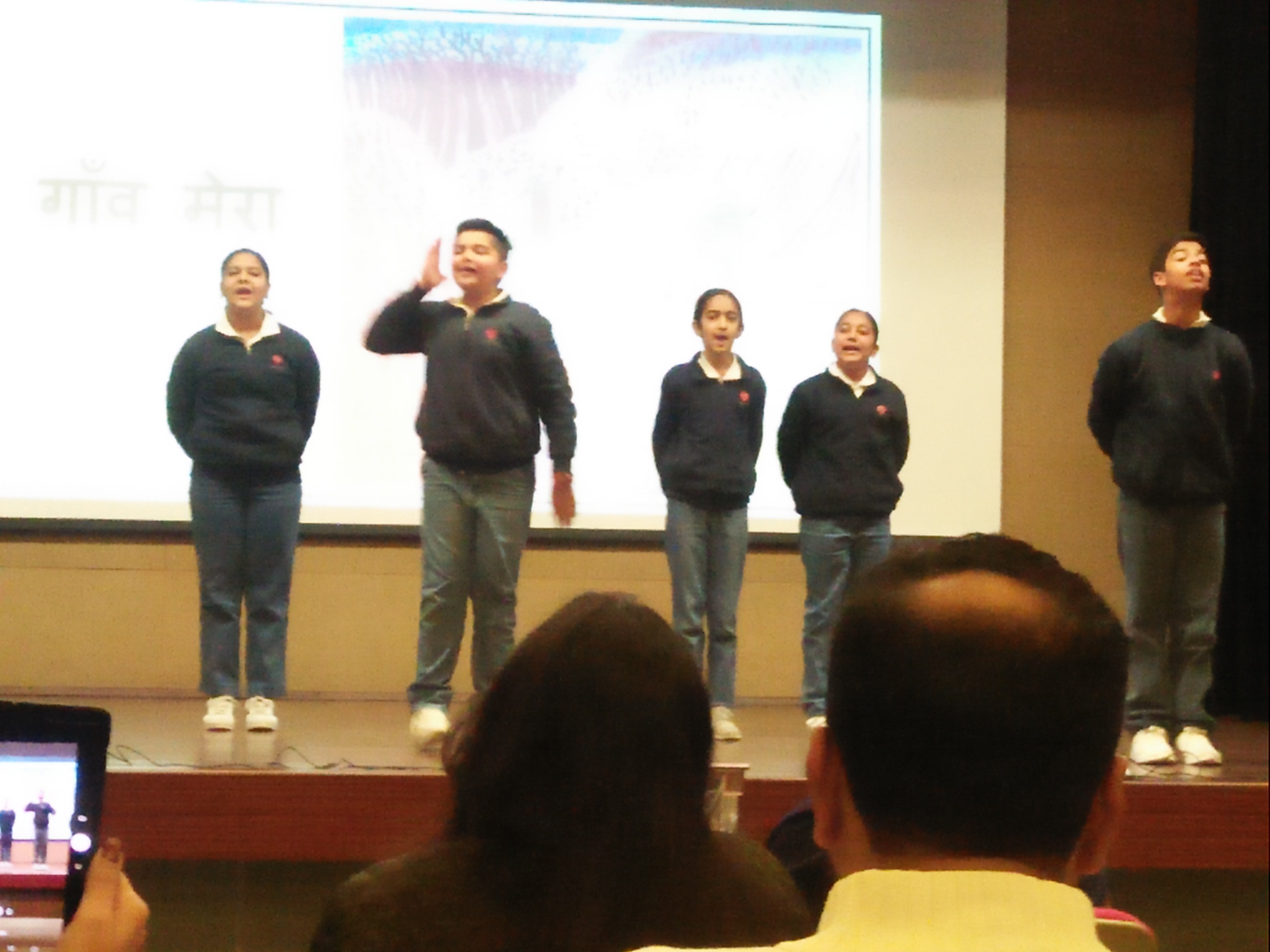 The Hindi Department put up the much awaited Annual Literary Inter House Competition, ‘Vaagmita’ on the 21st of January 2020. The Newton Hall was packed to capacity as students and parents waited for the event to begin. Different literary genres like Poetry, Biographies and Short Stories were performed by students of Grades 5, 6, 7 and 8 respectively. It was a morning of unbridled enthusiasm as the orators took us on a roller coaster of emotions ranging from laughter to profound sadness and reflection.

A special mention must be made of all the participants who did such a stupendous job and delivered their lines with such clarity and conviction. Certificates were handed out by the esteemed judges, all proficient educators of Hindi, as the event came to a close. We can’t wait to see what the next edition of Vaagmita will be like! 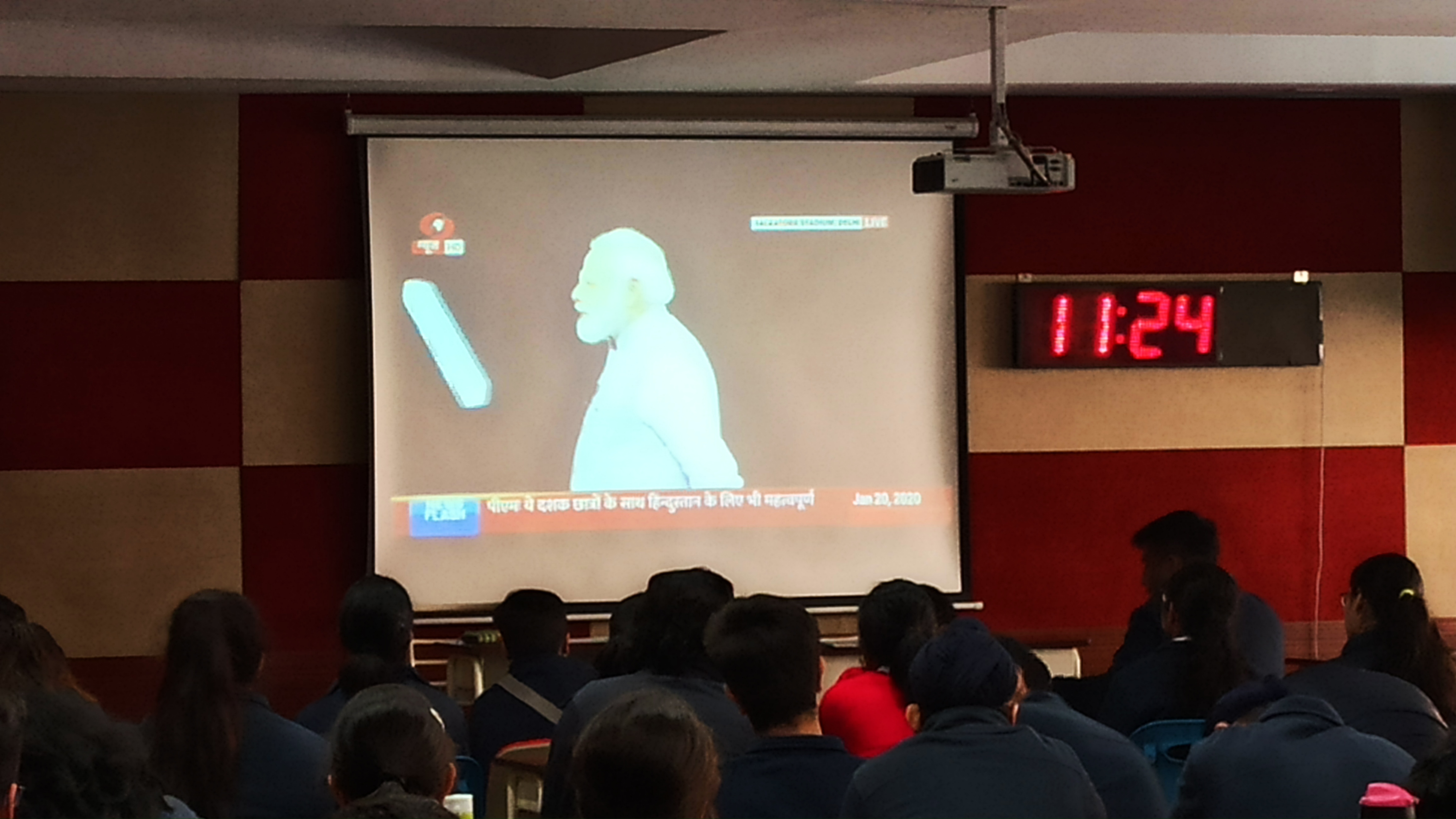 Prime Minister Shri Narendra Modi interacted with around 2000 students at Talkatora stadium, New Delhi today at “Pariksha PeCharcha 2020”. The programme is a unique initiative to ensure that students take exams without too much anxiety, to ensure better results in the long run. The event was streamed live in school and was viewed by the students.

To begin with, the PM elaborated on the importance of extracurricular activities. He urged parents to allow their wards to explore different hobbies and interests. He stated that unless children partake in such activities, they will eventually “turn into robots”.

Further he voiced his opinion on the use of technology by students; saying that while it does have a plethora of benefits, it inevitably becomes too addictive and time consuming.

When asked about dealing with parental pressure relating to academics he replied, in jest, that he felt that the students were using him to convey a message to their parents which they themselves were unable to. Later, he advised parents not to push their children or pressurize them with respect to their academics. He also commented on how pleased he was that the students felt comfortable enough to seek his counsel on such subjects.

Shri Narendra Modi concluded the fruitful session by encouraging students to be confident about their own preparation and to have faith in themselves. 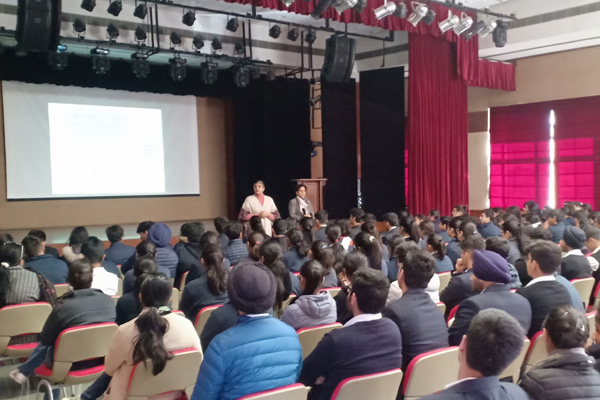 A relevant and pertinent session regarding Substance Abuse was held by Dr. Ruby Ahuja, a psychologist of repute on 17 January, 2020. Dr. Ahuja has more than 18 years of experience in the field of Clinical Psychology and has been providing counseling services to various multinational companies across the country. Over the years she has conducted various workshops related to stress management and behavioral health. She is registered with the Rehabilitation Council of India and a certified CBT trainer, NLP practitioner and a member of various National and International Journals.

Dr. Ruby gave an eloquent insight on substance abuse and its various impacts on the human brain, to students of grades 9 and 11. The session was quite an eye-opener for both the students and the educators.  Through her interaction with students she made clear that there is no substitute to good health and children must learn to say no and not resort to any kind of peer pressure for substance use.

The students interacted freely and cleared their doubts on various issues pertaining to addictions and use of drugs. 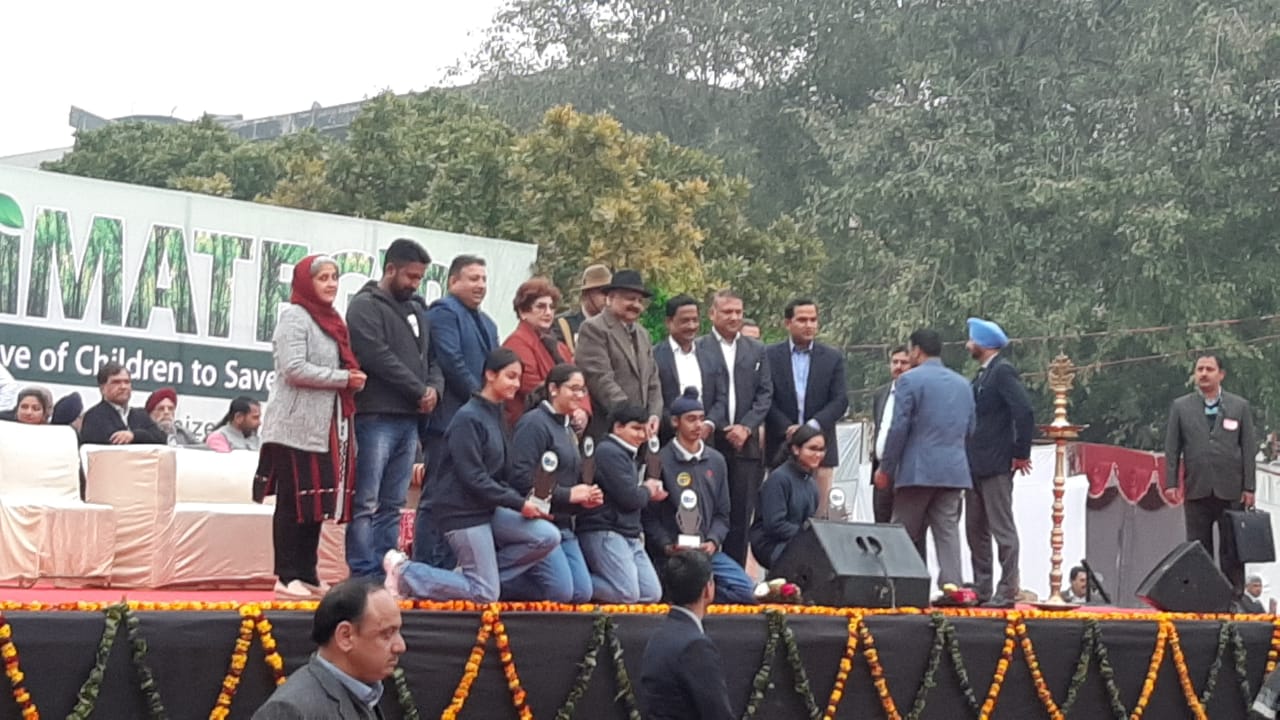 January 21, 2020 Deplastify Campaign Shines at the Climategiri event!
As part of the ongoing endeavours at Strawberry Fields High School, the young students congregated in the Plaza in sector 17 to raise awareness regarding the environment and climate change in particular. Climategiri is a call and initiative by the youth to involve the general population in actively involving themselves in projects that help to sustain the planet.
The enthusiastic bunch of youngsters spoke out for the need to act, suggesting plausible actions and examples from the projects taken up at school.
‘Deplastify’, the School’s active venture was explained. Vaanya Gilhotra told the crowds that had gathered in support of Climategiri, about how each Friday at school, single use plastic is gathered from the students who bring it in to further be packed and sent to Shayna Ecounified India Pvt. Ltd., Noida.
The tiles that are manufactured using the plastic were displayed too. The Municipal Commissioner Mr K K Yadav and the Hon’ble Governor Punjab and UT Administrator Mr V P Singh Badnore felicitated the young SFHS sleuths and encouraged the other schools in the tricity to join forces with Strawberry Fields and pitch in towards saving the Earth for habitation for the coming generations.
The other dignitaries present at the event were Mr Manoj Parida the Advisor to the Administrator UT and the  Mayor Chandigarh,  Ms. Raj  Bala Malik.
Read More 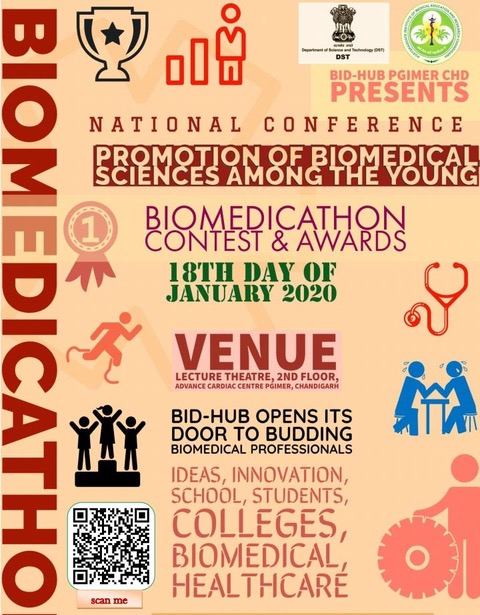 Students of Strawberry fields High school participated in the ‘Biomedicathon Contest’ organized at PGIMER on January 18th, 2020.  The contest aimed at promotion of Biomedical Sciences among the youngsters. The innovative ideas presented by students Ameek Bains, Missal Karan, Saarisht Kalra, Namandeep Singh and Ishika Wadhwa of class 9, were shortlisted to be presented at the National Conference which was a big achievement for our budding scientists.

Ishika Wadhwa brought laurels to the school by winning the first position in the Group 1 category. Her idea was aimed at developing an app to bring awareness among the rural women towards female hygiene and health. All the students were felicitated with participation certificates.

Dr. Seema Wadhwa, Associate Director Gynaecology at Max Hospital conducted a talk and held an interactive session for the girls of classes 6 and 7 on Thursday, 19th December, 2019. Girls at this age are naturally curious about their bodies and have many questions and concerns. It is important to be as open as possible so that they are prepared for the changes ahead.

Dr. Wadhwa spoke to the girls about attaining puberty and bodily changes associated with the onset of puberty and the importance for young girls to calculate their BMI and sustain a healthy weight and diet program at this time of their lives. She also addressed the onset of menstruation in girls at this age and how to maintain personal hygiene. Dr. Wadhwa, an expert in her field was able to address the queries of the young girls, and has shared her number with them, should they further wish to discuss any problems with her. 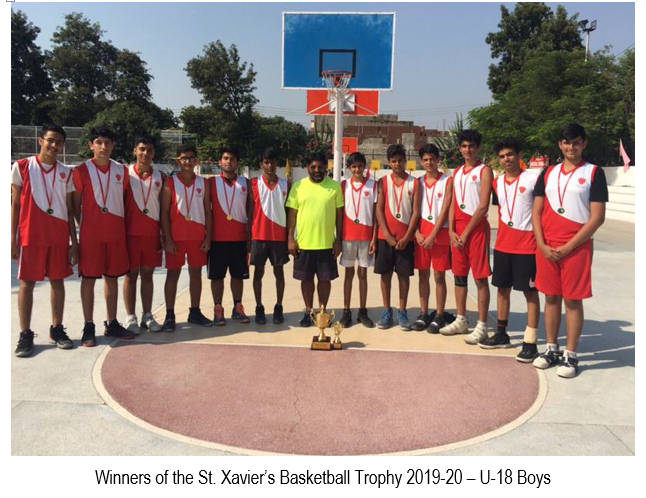 “What distinguishes a great player is his presence. When he goes on to the court, his presence dominates the atmosphere” – Bill Russell

In the past months, the SFHS basketball teams, coached by Mr. Ajay Thakur, have proven that hard work and determination can lead to success.

October began with the teams playing the 7th Bhagwant Singh Memorial Basketball Trophy. The tournament was organized by Vivek High School from 14 October till 19 October 2019.

On the 1st day of the tournament, the team played and won with a score of 31-14 against the team from DC Montessori School.

The team played the final match against the team from St. Peter’s School. The enthralling match ended in a win for our team. The recorded score was 46-23. The team was awarded the winners’ trophy.

The 1st match was played on 2 December 2019 against the team from Sacred Heart which our girls won 25-4.

The 2nd match, played on 4 December 2019,was a smashing victory against the team from DAV-8, Chandigarh.

The 3rd match was played on 5 December against the team from Vivek High School,Chandigarh. The win was a hat trick win for the girls with a score of 8-1

The girls were praised for their skill and were declared Runners Up of the Tournament.